Here you will find the list of Gujarati movies that will release in the year 2019. Also, get to know the details about all the movies. 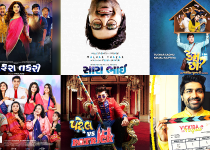